Malaysia is one of the most culturally diverse countries in Southeast Asia. Having been settled by British, Portuguese, Dutch, and Chinese over the centuries, this country is a proper melting pot of cultures.

Most people start their Malaysian travels in Kuala Lumpur, the capital city. This urban metropolis is home to near 2 million people and contains strong influences of Malay, Chinese, Hindu, and Muslim communities all seemingly coexisting.

Further north of Kuala Lumpur you can escape the tropical heat while visiting the Cameron Highlands, or Genting Highlands, and get lost in the jungles of Taman Negara National Park.

Approximately 1,500 kilometers away, the state of Sabah on Borneo offers pristine jungles where Orangutans and wild Pygmy Elephants still roam wild. This is a region that nature lovers cannot miss.

How Long Should I Stay?

To see all of Malaysia including all 4 areas below: two to three months is ideal, there is a lot to see here.

For a typical 2 week trip: pick a region and explore that instead. Sure, you won’t see everything, but it gives a reason to return.

I like to think of Malaysia in four distinct regions.

Get Off the Beaten Track

Malaysia is far more developed than other countries in Southeast Asia. Buses and trains cover much of the country and are an easy way of getting around. To get further off the beaten track you can take local vans to smaller towns like Ranau, or visit the national parks.

For the most remote parts of Malaysia try the Danum Valley, Maliau Basin and less visited towns along the Peninsula East cost in Pahang and Terenggau.

Travelers of most European, Commonwealth, and ASEAN nationalities can get a 90 day tourist visa on arrival for free when entering Malaysia.

When arriving by air you may be asked for proof of an outbound journey from Malaysia. This can either be a flight, bus, or boat which you easily can book here. 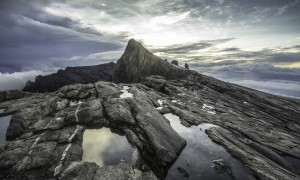