The Amphawa floating market is one of the most iconic places to visit in Thailand. It’s located just 90 minutes south west of Bangkok in Samut Songkhram on a series of small canals (klongs) branching off the Maeklong River. It is a great Bangkok day trip and an easy escape from the city.

The canals really come to life at the Amphawa Floating Market. Boats zip around offering all sorts of goods, old ladies yell about how tasty their fresh mangoes are, and you’ll probably even see people showering in the canal. It is a very local area, not overly developed for tourism so expect to see an authentic view of the Thai lifestyle.

The market itself can get quite busy with tourists on the weekend. Boats will pull up to hungry visitors offering grilled seafood, fresh fruit, Thai desserts, and local souvenirs. It really is life on the water. There is so much happening along these canals that they’re almost as busy as downtown Bangkok!

In this article, I will show you how to get to the Apmahwa Floating Market, what to buy, where to go, and the typical market opening hours.

>> Keep it simple and travel with a private tour by locals – TakeMeTour is offering discounts on tours now!

What is a Floating Market?

When you visit the Amphawa floating market you’ll quickly understand why Bangkok was once called the Venice of the East. There is water everywhere you look!

Many years ago, Bangkok was crisscrossed by thousands of these canals – referred to as klongs in Thai. Back then it would have been more common to travel around the city by water than by the road. However, over the years the canals were filled in one by one. These days there are only a handful of canals left in the city. Many of the remaining floating markets have been pushed out to the city limits.

The Amphawa Floating Market is one of these markets on the outskirts of the city. While Samut Songkhram is not actually part of Bangkok, the urban sprawl may make it feel as though it sits just on the edge of the city.

Most floating markets, like Amphawa, cater to weekend visitors. They are not open seven days per week as locals tend to visit fresh markets or night markets in the city.

Also, not all floating markets are located directly on the canals, some are built nearby the water. However, the Amphawa floating market is built right on top of these canals making it a unique and exciting destination to visit.

What can I buy at the Amphawa Floating Market?

The range of souvenirs and other goods are similar to those at the Chatujak Weekend Market. Expect to find printed “I Love Amphawa” t-shirts, traditional textiles, and herbal soaps. Not all these souvenirs are what I’d go out to buy, but some are definitely nice!

The real attraction, and what draws so many Thai visitors, is the food. Thai people love going out of their way for a big seafood meal and Amphawa is no exception.

For those that like playing it safe, try staple Thai dishes such as Pad Thai, Fried Rice or Krapow. Get a little more adventurous with Boat Noodles – rice noodles with sliced meat in a pig’s blood soup.

However, seafood is what people really visit for. Sit alongside the canal on the stairs or the low lying benches. BBQ seafood restaurants on boats will pull right up to offer you grilled prawns, shells, snails, fish, and squid. Being only a few kilometers from the coast, you can expect the seafood to be fairly fresh. I don’t guarantee you coming away without Bangkok belly though.

As you wander through the market you will also find a range of really unique looking Thai deserts. These traditional desserts are generally made of tapioca starch, mixed with bright colors and served up in sweetened condensed milk on ice.

Another great dessert to try is the coconut ice cream served up in an emptied half coconut shell. The ice cream is then topped with peanuts or Thai sweets all for about 30THB (1 USD).

When you’re full of seafood and Thai sweets, go in search of a Thai style iced coffee. This is sure to break the food coma ready for the next lot of exploring ahead.

After lunch, get on a longtail boat tour to explore the area surrounding the floating market. Longtail boats are, as the name suggests, long wooden boats. Traditionally they would have been rowed around the canals. These days they have a hugely oversized motor which you can hear from anywhere.

The longtail boats are so loud that you should really try to sit up the front. You will have to get on the boat first because the Thai’s have figured this out already too.

Watch out for the boat price scam. Some sneaky locals will try to get you on a private boat for 2000 THB (USD 80). The boat price for a single ticket on a shared boat is just 50 THB (USD 2) per person. That’s a huge difference!

The longtail boat will take you exploring the area surrounding the Amphawa floating market. You’ll journey through small canals like those at Khlong Lat Mayom closer to Bangkok, and then venture out across the Mae Klong River.

Out here you’ll pass stilt houses constructed on the river. In between, there are mangrove forests, while behind there are small rice farms and coconut palms.

Boat tours generally last about 1 hour and include a visit to a Thai temple along the river.

The Thai temple is impressive. One of the most popular things to see here is the temple inside a tree called Wat Bang Kung. This is one of the most iconic destinations in Samut Songkhram.

If you are hanging around the market until later at night then I suggest joining the Amphawa firefly tour. The tours are run on longtail boats that depart the market around 7pm. The boats will have a large sign saying “firefly tours” so you can’t miss it.

The Amphawa firefly tour will take you back out onto the Maeklong River. Here it will slowly pull up to a few areas which are well known for watching the fireflies. On some nights the trees really light up like a Christmas tree! This is the most fireflies I have ever seen in one place.

The firefly tour is a unique experience and well worth doing. The tours last about 45 minutes to 1 hour. This is plenty of time to see the fireflies. I wouldn’t suggest going for any longer as it would start to get boring after a while.

What are the Amphawa Floating Market opening hours in 2019? The market is open on weekends only. Don’t visit during the week as the stalls will be closed and the canal will be quite lifeless.

The market is open on both Saturday and Sunday from 11am until after 8pm. I’d suggest that the best time to visit is after 2pm. This is when the market comes to life with lots of the fod stalls opening up for lunch. The market stays busy from 2pm through to late at night.

The last bus leaves the market around 7pm to 8pm. Be sure to check the timetable on the day you go, so you don’t have to get a taxi back!

How to Get to Amphawa Floating Market

จากกรุงเทพ – the best way of getting from Bangkok to the Amphawa Floating Market is by minivan (tickets and timetable). Tickets start at 150 THB (USD 5) per person. A one-way journey takes about 90 minutes and takes you directly to the market.

Minivans depart hourly from Bangkok’s Southern Bus Terminal (Sai Tia Kai Pinklao). You will need to catch a taxi to get to Sai Tai Kai Bus Terminal in Bangkok as it is located a fair way out of the city center already, in an area that lacks a public transport train line. A taxi to the bus terminal could take up to 30 minutes itself, so allow plenty of time.

Back to Bangkok – the return journey from Amphawa to Bangkok could take much longer than 90 minutes depending on traffic. This is one of the busiest highways in Thailand as it is the main thoroughfare to the provinces in the far south. Do not plan on flying out of Bangkok the same night as you visit this floating market.

Note: the minivan to Amphawa floating market used to depart Victory Monument BTS station, however, all services have been relocated since 2016.

Amphawa and Maeklong Railway markets are located less than 30km apart. They can be easily combined into a great day trip.

The easiest and cheapest way to get from Maeklong Railway Market to Amphawa Floating Market is by songtaew. A songtaew is pick-up truck style taxi with two rows of seats in the back.

I suggest visiting the train market in the morning then head over to the floating market in the afternoon. Check out my article on the Maeklong Railway Market for more information.

Other Floating Markets Around Bangkok

Bang Nam Pheung – this is a small floating market located in the heart of Bangkok on the island called Bang Krachao. The market is not built directly on the canals but loosely around them. Bang Nam Pheung is visited mostly by locals and expats. The market is open on weekends from early morning and closes by about 3pm.

Khlong Lat Mayom – this is a very local and authentic floating market located in the northwest of Bangkok. The market is built directly along the canals with lots of small boats like Amphawa. There are also longtail bot tours that explore the surrounding area.

Damnoen Saduak – this is a fairly touristy floating market located 15 kilometers north of Ampahwa. It is easily combined with a day trip to Ampahwa Floating Market and Maeklong Railway Market. 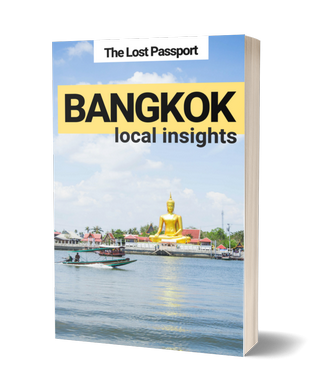 Is THIS Your Next Destination?