11 Unmissable Things to do in Darjeeling!

What to do in Darjeeling, India

In this article, we will dive straight into an amazing list of things to do in Darjeeling. These destinations will give you a great feel for the local culture, it’s people, and the stunning landscapes that surround.

Darjeeling is located in India’s far northeastern state of West Bengal, right at the foothills of the Himalayas. This is possibly one of the most culturally diverse regions in the world with Nepal, Bhutan, China, and Bangladesh all just a short distance away.

Many would say that Darjeeling is the most beautiful region in India. Famous for its picturesque tea fields, one of the world’s tallest mountains, an iconic UNESCO World Heritage Site, and countless beautiful attractions, there is plenty of reason to visit.

If this all sounds exciting to you, then Darjeeling holds a worthy position in your travel itinerary and you should definitely read on.

Our Top Things to do in Darjeeling

Usually the first item on anyone’s list of the things to do in Darjeeling. This is a scenic lookout where you can view Mount Kanchenjunga and other parts of the Himalayas. For a clear view, it is best to visit in October and November.

Observatory Hill is located in the Chowrasta square, also known as The Mall, which is one of the main attractions in the city. Despite the high number of tourists visiting this area, it is also one of the cleanest places in the entire city. It is also a great spot to pick up a souvenir or take a pony ride around the area.

Previously, Observatory Hill was home to the Bhutia Busty monastery, but after Nepali troops invaded the land in the late 1700s, it was converted into a Hindu temple. Now Mahakal temple, dedicated to Lord Shiva, can be visited on the hill.

Opened in 1881, the Darjeeling Himalayan Railway is also known by several other endearing terms including DHR and the Toy Train. This is one of the three scenic mountain railways in India. The 88 km train line was declared a UNESCO World Heritage Site in 1999 for its innovation and advanced technology of the time.

The train starts out at an altitude of 100 metres. It then gradually climbs its way to a whopping 2,000 metres above sea-level with six zig-zags and five loops along the way. You’ll definitely feel a sense of nostalgia on this steam-hauled locomotive as it chugs up the mountain.

The railway network has stations in many locations, including; New Jalpaiguri, Rangtong, Sukna, Mahanadi, Kurseong, Ghum which is the highest summit, and, of course, Darjeeling. If you are planning to visit any of these areas while in Darjeeling you can do so via this historical train ride.

Here’s an impressive fact about the tea estates in Darjeeling: there are more than 87 of them, stretching over 17,500 hectares of land and producing more than 10 million kgs of tea every year. That’s a whole lot of tea!

Whether you simply want to stand amidst the greenery, soak in the aroma of tea, or actually have a sip of the drink, a tea garden is a great place for you to visit.

With 87 tea gardens in Darjeeling, there is no shortage of options! We recommend starting with the city’s oldest tea garden, the Makaibari Tea Estate, created in 1859, and certified as a fully organic tea garden. They produce around 100,000 kg of tea annually! They also have homestay accommodation, which is worth considering. The Happy Valley Tea Estate is the second oldest tea garden and also well worth a visit.

Another location offering a panoramic view of Mount Everest and Mount Kanchenjunga. Tiger Hill is located around 11 kilometres from the town of Darjeeling and takes roughly 40 minutes to reach by car. You can take a shared jeep from Club Side Taxi stand or Chowk Bazaar, or book a car (driver included!).

On a clear day, you’ll be able to see as far as Kurseong City in West Bengal as well as the Teesta, Mechi, and Balason Rivers that run down from the Himalayas. If you would like to learn more about the wildlife in the region, you can even visit the Senchal Wildlife Sanctuary.

Speaking of wildlife, the Padmaja Naidu Himalayan Zoological Park is another great attraction near Darjeeling. Here you can see animals from both Darjeeling and surrounding regions. It is one of the most popular attractions in the city, with over 300,000 visitors every year.

As you might expect, the animals in the zoo are best adapted to alpine conditions. Captive breeding programs for endangered animals have been introduced here to assist in preserving the region’s biodiversity. Some notable animals include the snow leopard, grey peacock pheasant, Himalayan wolf, blue sheep, and red panda.

Needless to say, this is a must-visit location for animal-lovers. Even those who are not particularly fond of wildlife will stand in awe of the fauna of the Indian-Himalayan regions.

India is a place known for its spirituality and for good reason. You’ll find at least a few temples in every single city you visit, and Darjeeling is no exception.

Mahakal Mandir, also known as the Mahakal Temple is located on Observatory Hill that we mentioned earlier. The Mandir is a famous Hindu temple devoted to Lord Shiva. It is a highly sacred location for Hindus as it is believed that three Shiva-Lingas (representations of Lord Shiva) appeared here in 1782.

Since Darjeeling is an area where Hinduism and Buddhism coexist, so you’ll likely see Buddhist influences in the temple too.

There are also various other temples, shrines and monasteries located in the area, giving it a spiritual and calm ambiance. Check out the Tibetan memorial shrine, the Kali temple, and shrines for other Hindu gods, such as Durga, Ganesha, and Krishna. 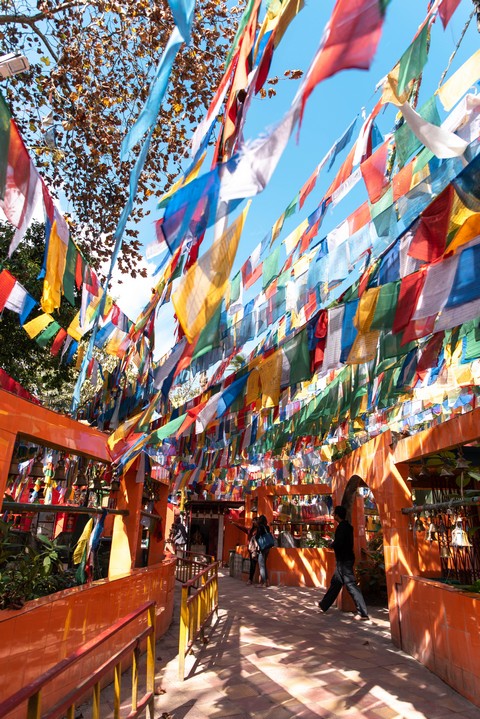 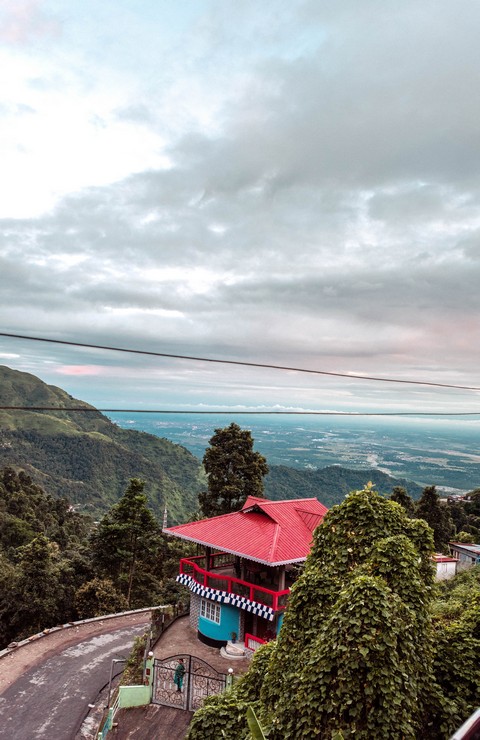 Batasia, meaning “airy space”, is a loop that is part of the Toy Train’s line to handle the steep incline, and is known for its war memorial landmark and beautiful views. It is on the Hill Cart Road (National Highway 55) and about 20-minutes by taxi from the town of Darjeeling.

The Darjeeling Himalayan Railway passes through this loop and along the other landmarks surrounding it. In fact, the reason the loop was created was to make the train’s ascent up the mountain easier.

One example of a landmark you’ll pass by is the Batasia Loop War Memorial, which also offers a great view of Mount Kangchenjunga. Foliage and flower gardens cover the area around the memorial, offering some beautiful scenery from the train.

The Batasia Loop Market is also located right next door where you can find as assortment handwoven bags and clothing.

The institute gives visitors an opportunity to learn more about Tibetan culture. It is a museum located in Gangtok, a few miles from Darjeeling, which was founded in 1957. Research projects are constantly being conducted at the museum, some of which even give visitors a chance to participate.

For instance, one project aims to study and record the history of around 60 monasteries in the state of Sikkim. Another aims to digitise the rare images of Sikkim and make them available to the public.

If academia is up your alley, you should definitely consider visiting this museum. From history to art to religion to language, there is a lot you can learn about Tibetan culture here.

Are you an avid rock-climber or mountaineer? If yes, the Himalayan Mountaineering Institute offers several opportunities, such as trekking tours, for you to exercise your skills. If not, you can learn a new sport!

A number of courses are offered at the institute. If you have a month to spare, you can even take up the basic or advanced mountaineering course which includes activities such as trekking and camping.

Also, the very first director of training for this institute was none other than Tensing Norgay, one of the first two people to reach the summit of Mount Everest.

This lake is not technically located in Darjeeling but in the nearby city of Gangtok. As you search for tour packages to this hill station, the phrase Darjeeling and Gangtok will probably come up a lot. The two places are often toured together, given their proximity.

Tsomgo Lake is about a four-hour drive from central Darjeeling and it is absolutely worth visiting! You’ll be amazed by the landscapes with the lake situated in between soaring mountains. Depending on the time of year you visit, you will see a blue, grey, or white-coloured lake.

It is important to note that the lake is located in a restricted area. An Inner Line Permit (ILP) is required for visitors from abroad, which can be obtained on the spot with an Indian Tourist Visa from all Indian Missions, Sikkim Tourism Offices (New Delhi and Kolkata), and District Magistrates Offices (Darjeeling, Siliguri, and Rangpo).

Whether you’re exploring temples on Observatory Hill, checking out one of many of Darjeeling’s tea gardens, circling Batastia Loop on the historic Darjeeling Himalayan Railway, or visiting the red pandas at the Padmaja Naidu Himalayan Zoological Park, there is no lack of things to do in Darjeeling.

Venturing a bit further to beautiful Tsomgo Lake in Sikkim is often something travellers will do as they are relatively close in proximity. Or, for the adventurous crowd, the Himalayan Mountaineering Institute can help you along the way with a variety of intensive training courses and treks.

All in all, if you want some respite, Darjeeling is the perfect place to visit. The natural beauty and Indo-Tibetan culture create a refreshing, relaxing, and even spiritual atmosphere that will leave you, quite simply, in awe.

Harsh was born and raised in Kolkata, India (closest major city to Darjeeling), and has now lived overseas for several years in both the UK and Canada. Having lived in Western countries, and being married to a Canadian, he observed that there is a great interest from Westerners about travel to India, but that there is also a great deal of misunderstanding and confusion about the country.

He, therefore, created the blog An Indian’s Guide to India, which is a travel guide that provides insight into India that only a native can know, and also acts as a bridge between different cultures. The site includes insider tips and tricks about Indian culture, travel basics to the country, health and safety, and destinations. One great read to start with is A Guide on Indian Culture for Travelers along with his Facebook and Pinterest pages. 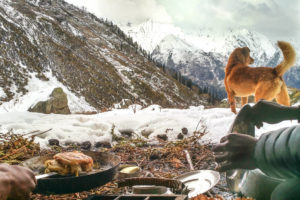 I’ve traveled all over much of Asia taking on hikes such as Mount Kinabalu, however India and The Himalayas are still high on my list.