I’ve traveled all over much of Asia taking on hikes such as Mount Kinabalu, however India and The Himalayas are still high on my list. Guest writer Joy takes us through on an adventure of hiking the Beas Kund Trek with a few Sherpas right into the face of a huge snow storm. If you’re planning to take on the Beas Kund Trek this is a must read.

Challenging the Beas Kund Trek with a Snowstorm & a Sherpa

Beas Kund, said to be the source of River Beas is an extraordinarily beautiful spot nestled in the wilderness of the Himalayas.

It is a trekking destination that sees quite a few visitors in the summer season. The Beas Kund Trek is a rated quite easy which people with no experience of mountaineering can easily complete. This fact doesn’t hold for all seasons though. The level of difficulty increases substantially when the diminishing heat of the summer gives way to the impending dank vagaries of the cold.

Having been there before in the month of May, I chose a different time of the season to witness the marvel of the glacial lake. It was the month of October this time round.

The closest prominent town to Beas Kund is Manali. Manali is among the best hill stations of India and is a year round magnet for tourists. With the adventurous and intriguing mountains beckoning backpackers come to hang out in the hippie villages around the main town; adventurers come for trekking, climbing, mountain biking, canyoning, paragliding, rafting and skiing; and Indian families and honeymooners come for the cool mountain air and a taste of snow on a day trip to the Rohtang Pass.

Manali welcomed me with biting cold winds, with temperatures going as low as -2 degree Celsius. I spent the night at the Johnson’s Lodge, a hotel famous among the foreign tourists. The temperatures at night dropped down to -10 degree celsius and as far as the eyes could go, one could only see jagged mountains masked with snow. At such high altitudes a shred of boyish insouciance could eventually be the reason for one’s downfall. Oh! and just so that you all know, just two days prior to my arrival in Manali, a major Earthquake had struck the Northern part of India. All the more reason for my being cautious and better prepared!

Finding a Sherpa for the Beas Kund Trek

According to my plan I was to look around places in Manali, where I could find good and cheap camping equipment along with a guide or a porter. Although it was an easy trek, it was highly advised that I take the assistance of a guide as the temperatures up there at Beas Kund were far from pleasant.

After having a sumptuous breakfast at Johnson’s, I set out to seek a guide and equipment necessary for survival. Manali being the perfect stop for many mountaineers from India as well as many other parts of the world is host to many travel and adventure companies who offer just the kind of assistance I was looking for. So all filled up with a sense of hope and optimism I walked across the Mall Road, the biggest market in Manali.

Things though didn’t turn out the way I expected them to be. Every adventure agency I visited suggested me to either call off my plan of going in to the wilderness or delay it for at least a week. I had not traveled all the way to just cancel my plan and call it quits, so I tried to talk my way through. Although my talking proved to be effective and the guys at the agency yielded after all the resistance, it was no good. They were willing to risk it for my sake but then they wanted me to pay a price that was five times than the normal! Being a college student the money they were demanding was just out of my reach financially and I had to turn down the idea of hiring from an established company. 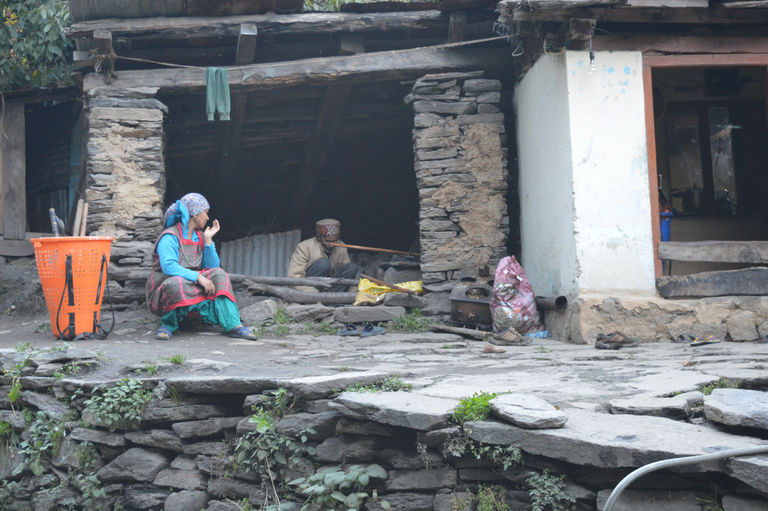 But I just couldn’t let go so easily. So from the experience of my previous visits I knew that Manali was home to a small community of Sherpas from Nepal who ran their small food stalls for survival and offered their mountaineering expertise to earn that extra buck.

Exploiting my knowledge of the local dialects I managed to reach the street from where these people operated. People guided me to this particular stall where a couple of men in their mid 30’s were smoking charas (hashish), a drug that is very famous in this part of the world. I laid down my prospect in front  of them and to my surprise and sheer happiness they agreed to accompany me up till Beas Kund for a very low cost, I just had to pay for their food for the entire duration they were with me.

Starting Points for the Trek

The trek for Beas Kund can be started from two different locations, Solang Valley and Dhundi. The sherpas helped me find cheap camping equipment at Solang.

The second starting point, that is Dhundi is actually the last road-head before the trek and only authorized vehicles are allowed to commute as it is a restricted area and is prone to Avalanches. The Samaritans that those Sherpas were, they helped me hitch a ride to Dhundi. 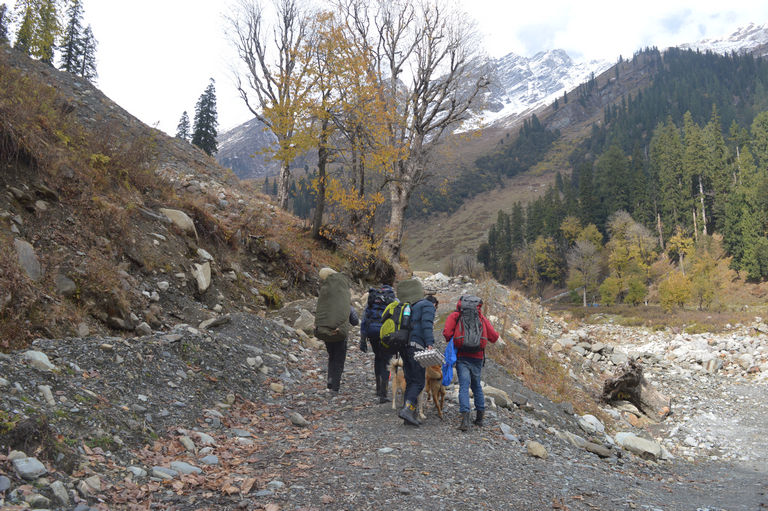 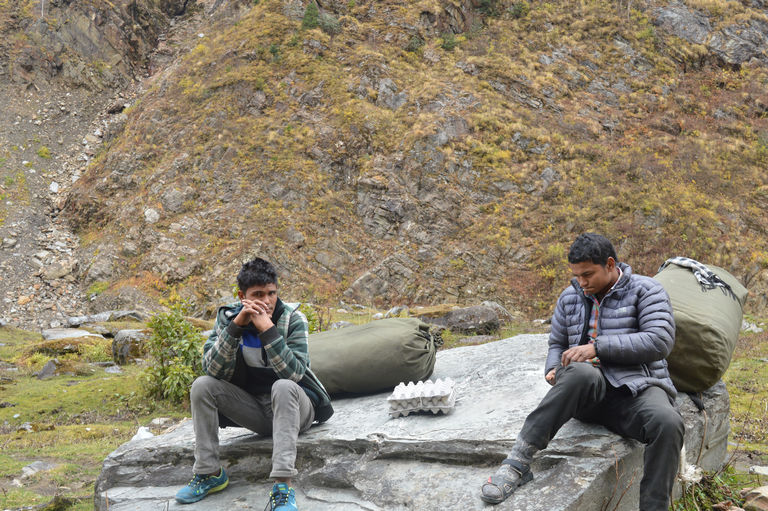 On reaching Dhundi I felt reinvigorated after all the disheartening from the previous day.In the very first few minutes of the trek we bumped into three guys who were students of some local mountaineering institute. Surprisingly they were headed for the same destination as well. They joined in our expedition and we trudged our way up the boulders. There is 1km long stretch of boulders that one needs to cross in the initial phase. As we ascended higher the porters showed me boulders along the path we were treading on, those boulders were supposed to be markings to guide tourists towards Beas Kund. They markings on the boulders were smeared in snow, without the assistance of the Sherpas I would have been literally lost in the wilderness.

we experienced heavy snowfall and signs of an impending blizzard, our tents were half immersed in snow

We set up our camp at Bakartach (3290 mtrs). It started snowing in the middle of our journey and it was almost impossible to set up camp in the heavy snowfall. We had to sneak inside a small cave to seek shelter and waited there for a long 2 hours until we finally pitched our tents.

Once the tents were pitched, the porter prepared the night’s meal. It was -7 degree celsius and the we could easily hear the swaying winds. The students of the mountaineering institute somehow kept on emphasising on the inclement weather and how it could change in a fraction of few minutes. 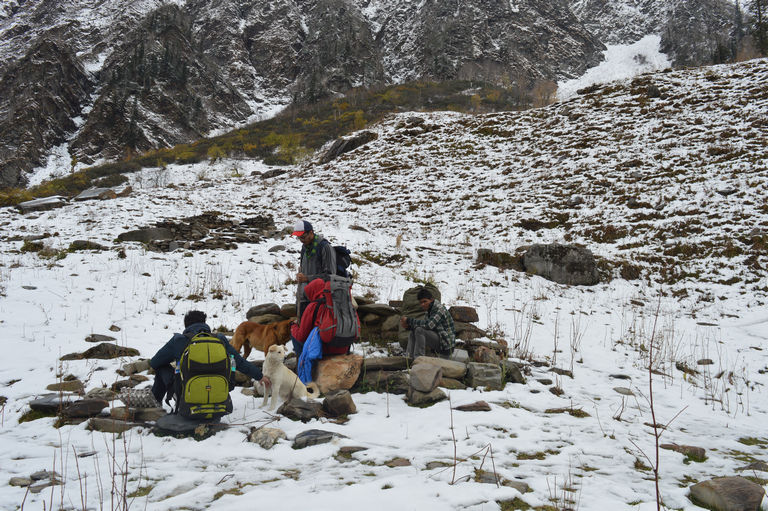 The next morning we experienced heavy snowfall and signs of an impending blizzard. Our tents were half immersed in snow and we had to use spades to get rid of the snow that blocked the face of our tents. It took us an hour in doing that. The clouds that were white the previous day had now turned almost black. At those altitudes I would call such scenes as a form of muted savagery. We trudged and tumbled up to the glacial lake, Beas Kund, spent less than an hour up there and traced back our paths. Camping at night was by no means a sensible thing to do and we didn’t.

It was a new experience for me as I had traveled quite a lot before this trip but never did I come across the dark side of nature. The energetic and intrepid youth in me would never let any aspect of nature bog me down but the closer I got to the dark side of the relentless nature, the more it sobered me down. This trip instilled in me a sense of fear, respect and admiration for the creation and since then whenever I’ve ventured into the wilderness it has been with a different perspective and increased curiosity.

This is a guest post written by Joy, a young traveler from India who loves reaching out to the unknown. Has extensively traveled across the Indian Himalayas. Read more about his intriguing travels at on his travel blog Wandering Cerebrations

Sharing is caring, spread the love on social media! 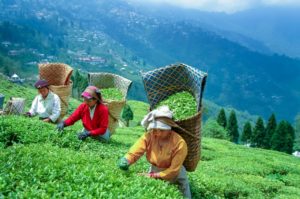 11 Incredible things to do In Darjeeling Right Now!

1 thought on “Beas Kund Trek Going Solo With A Sherpa”