Saiyok an Escape to Kanchanaburi’s Wild Side

Chilling out on a Saiyok Raft House

I swing back and forth in my rope hammock, relaxing in the warm afternoon. The air is filled by the calls of birds, and the trickle of the river running beneath the boardwalk. Lazing back in this Saiyok Raft House is one of the best things to spend a weekend away from Bangkok.

My floating raft house is located along the River Kwai Noi in the Saiyok District. Saiyok is situated about 40km from the Kanchanaburi city center. It is not quite as distant as Sangkhlaburi and the Three Pagodas Pass in the far west of Kanchanaburi, however, it is still far away enough to feel quite isolated.

The Tanyan Resort and Spa has a series of raft houses floating directly on the River Kwai Noi. Down the river there are only a couple other small boutique resorts. The surroundings are otherwise is a sprawling untamed jungle.

Our room is constructed of wood, bamboo, and straw. A bungalow well suited for the jungle. Inside it is a well-equipped boutique resort offering warm showers, a large double bed and a nice powerful air conditioner to escape the hottest parts of the day.

In the mid-summer heat, we laze the river with colder beers in hand. In Thailand, it is quite well known that Kanchanaburi Province is one of the hottest in the country, that includes the area of Saiyok.

As the afternoon comes along the temperature drops by a 5 degrees. I decide it is time to get out and explore the surrounding village and look for a few local things to do in Saiyok. Heading out for a run along the small rural back roads I pass villagers who stare inquisitively but smile as though they rarely get the chance to see a westerner out here. Perhaps they just think I am lost?

Young children ride bicycles as another chases a free range chicken along the dirt road. An elderly man slowly drives by in his pickup laden with onions from a local farm, playing a repeated recording shouting about how tasty his produce is and to come to get it quick. A little further along a middle-aged woman tends to her farm by manual labor, enthused to be a part of my photo to which she responds “Hollywood!”

I veer off the road and into the farming fields not really knowing what to come across. Exploring the fields the sky begins to turn a vibrant orange as the ‘golden hour’ of sunset arrives. However just as the sun begins to fall into the surrounding mountains a dense formation of black clouds begins to roll over the area. It is time to head back quickly before the sky unleashes the beginning of the wet season. Better off keeping dry under the cover of our raft house while feasting on a large green curry and knocking back a few cold beers.

After a refreshing morning swim and a decent sized breakfast, the following day is it time to get out and explore the things to do in Saiyok surrounding areas. There seems to be plenty to see and do in this outer district of Kanchanaburi Province which I have previously not been aware of.

Things to do around Saiyok

Prasat Muang Sing temple is more similar to Angkor Wat than those temples found in either Sukhothai or Ayutthaya. The area containing Prasat Muang Sing is quite extensive with 4 separate attractions to visit. In total, we spent about 2 hours walking around the ancient ruins. 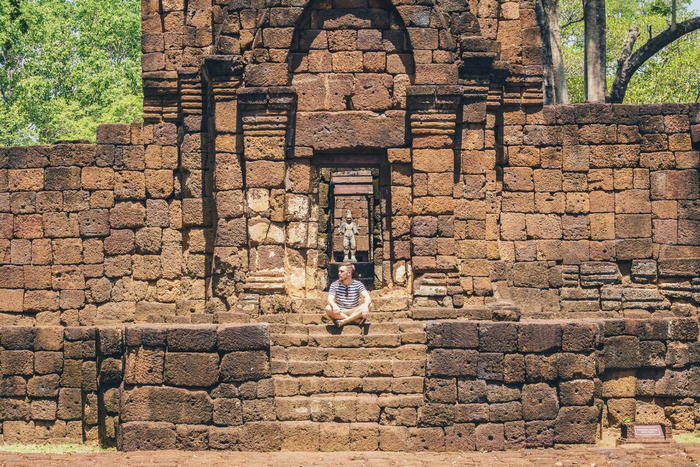 Next up on the journey is some more recent history from World War 2 known as Hellfire pass. This is the location where over 1,000 Australian and other Allied prisoners of war were forced to handbuild a train line to connect the Japanese occupied Myanmar and Singapore.

The train line built at Hellfire pass continues down to the river crossing in Kanchanaburi famously known as the Bridge Over the River Kwai. The cutouts and section of rail at Hellfire Pass is now preserved but unused and serves as a war memorial to those who died building the railway.

Entrance to Hellfire Pass is free and takes about two hours to properly explore the area.

Another local Saiyok attraction which we did not make it to in the space of one day is a visit to one of the waterfalls in the jungle.

Saiyok Yai Waterfall and the Erawan Waterfall are both popular choices, however, Erawan is my personal favorite. The Erawan Falls are located within the Erawan National Park just north of Saiyok. The waterfall is best accessible by hiring a Songtaew driver as transport for the day.

Heading further west from Saiyok to Sangkhlaburi goes to Off the Beaten Track destinations. Check out my article on jungle trekking to Kratengjeng Waterfall for an idea of what is to be discovered.

If you have found this article useful in planning your trip please share it on social media for others to make the most of.

Any questions? Just drop me a comment below and I’ll get back to you ASAP. 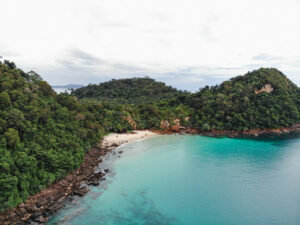