Surviving the Thakek Loop by Motorbike

The Thakhek Loop is one of those must-do motorbike journeys in Asia. I’ve personally motorbiked across Vietnam, around northern Thailand, and the northern half of Laos from Luang Prabang up to the Chinese border. Riding a motorbike in Asia is a great way to get off the tourist trail and experience the authentic lifestyle.

Southern Laos remains uncharted territory for me, so here writes Pete Vrouvas of TheOnlyPete.com about his trip along the Thakhek Motorbike Loop. His trip shows how wrong things can go while traveling, but still have a good time.

The Thakhek Loop a Motorbike Journey Through Hell

I recently completed the Thakhek loop by motorbike in southern Laos, and I barely escaped with my sanity. I can blame bad luck, Karma, or Murphy’s Law, but I think it really comes down to a case of “shit happens.”

The Thakhek Motorbike Loop is a four-day adventure through the western region of southern Laos. The counterclockwise route starts in Thakhek, then goes to Thalang, Kong Lor Cave, and returns to Thakhek.

In total, the Thakhek Motorbike Loop is about 440 kilometers in total. We did the loop in three days because we were tight on time and, of course, we are total badasses.

The morning we departed Thakhek I was excited and nervous. I was also sweating like crazy which I assumed was because I was wearing jeans and a long-sleeve shirt in 40-degree heat. Incorrect. I was actually burning up from Bronchitis which I had picked up earlier while traveling in Laos.

We practiced riding our motorbikes with a few shakey circles out the front of our hostel, then hit the road. Not a bad start.

A minute into our drive, we stopped to fill up on gas. My friend who had never even driven an automatic scooter before didn’t see us turn off for the gas station and just kept going out of sight – seamless start to the trip.

The first day out of Thakhek was a journey of only 65 miles. It was full of beautiful limestone mountains and nicely paved roads.

We stopped once for a short tour of the Xieng Liap Cave and once for lunch before reaching Thalang for the night. The 30-minute cave tour is only 20,000 Kip ($2.50) and it’s a fun little boat ride – definitely worth a pit stop.

In Thalang, everyone on the loop stays at Sabaidee Guesthouse. The guesthouse has a huge deck overlooking the surrounding water and landscape picture perfect for a few cold Beer Laos.

Day 2: Continuing on from Thalang

After Thalang, we passed through vast swamplands filled with dead trees that looked burnt and rotten. It is a spooky backdrop compared to the bright green mountains and forests around Thakhek.

We then made our way north to Ban Nahin to meet the road which goes south to Kong Lor Cave. In Ban Nahin, we passed a sign for the Nam Sanam Waterfall. We were doing well for time and figured we would check it out. HUGE MISTAKE.

To start off the wonderful waterfall trek, the man at the gate mentioned that we could ride our bikes. We rode through huge puddles of mud and after 100 meters we hit a stream. My buddy plowed right into the water and kept going until his bike shut off. Luckily, the bike still worked.

The forces that be were trying to tell us not to go and we were so close to turning around. But we didn’t.

Short on time, I had the bright idea of jogging the 3 kilometers to the waterfall. The trail looked pretty flat and easy, so why not?

A half mile into the jog, the path got extremely steep and full of obstacles to climb like boulders, roots, and trees. I started to realize something was wrong. I was out of breath, dizzy, and had intense chills.

Stubbornness or idiocy, I am not sure what was driving me, but I felt like I was committed to the trek at this point.

Burning up with fever and short on breath, I felt like I was near the peak of Everest. Finally, we made it to a shitty little waterfall with a pool. I jumped in to cool off until my friend said he found the path to the real waterfall. So, in my boxers, I got back on the trail.

Just when I was thinking about how great of a story it will be that I hiked through the Laotian jungle in my underwear, I got stung by the first Asian hornet on the back of my leg.

If you’ve been stung by a bee, you should know it feels like a puppy lick compared to these hornets. After yelling and standing in shock for two minutes, I put my jeans back on and trudged up to the real waterfall. Disappointing.

We turned around and started heading back to the motorbikes At the exact same spot on the trail I got stung by Asian hornet number two. This time, on my back right through my shirt! (Later and Australian traveler mentioned that if you get stung by eight Asian hornets, you go into shock and die. One-quarter of the way there!)

At this point, despite my breathlessness, I was getting the hell out of there. Back at the trail-head, I nearly passed out from my fever and poor lungs. We did manage to get back on the road and make it to Kong Lor cave two minutes before the tours closed.

The road to Kong Lor Cave changes from dirt and to sealed with giant potholes. Similar to the terrible road on the way to the Ban Gioc Waterfall in Vietnam. The route, however, is beautiful with tall mountains around rice fields and small villages.

The Kong Lor Cave tour costs around 40,000 Kip per person ($5) and takes 90 minutes in total. You get to ride seven kilometers on a tiny boat into a pitch black cave. The tour is an amazing experience, as long as you trust your boat guide not to get lost.

I do recommend doing the Kong Lor Cave tour as part of the Thakhek Motorbike Loop.

Barely able to bend my balloon knee to get on my bike and with my backpack conveniently rubbing my other hornet sting, we set out on the 115 mile ride back to Thakhek.

The entire ride, I was in the back so my friend who had never ridden before could be in the middle in case anything happened. Delirious with fever, tight-chested, and swollen, I was smashing 65 kph down a hill in the middle of nowhere when my back tire decided to give out.

The only lucky part of the whole trip might have been that I didn’t crash right there. After a few scary sides to side swerves, I slowed down and pulled over. As my two friends sped away out of sight, a few young men came over and confirmed that yes, my tire was popped, and no, they couldn’t help me at all.

15 minutes later, my friends had circled back and found me. Because I was physically useless, they walked my bike to a mechanic one kilometer up the road (also lucky) and I got a new tube installed for $5.

The final 80 miles or so of the loop is a straight ride on a highway. There wasn’t anything to see, so I mainly just braced myself for the new tire to give out or a passing hornet to get me in the jugular. Back in Thakhek, I finally got to a hospital for my illness, but my bad luck somehow continued.

At the hospital, I was diagnosed with Pneumonia due to my high white blood cell count. However, it was the hornet stings which causing my immune system to flare up and I was given the wrong antibiotics. I actually had bronchitis.

I purchased a cheap thermometer to keep track of my body temperature. I thought it was broken, so I shook it in anger, then it flew out of the case, shattered, and poured mercury on my feet. I’d like to add potential mercury poisoning to the list.

How was your experience on the Thakhek Loop?

If you are looking to do another motorbike loop, check out the Ha Giang Motorbike Loop in Northern Vietnam.

Surviving the Thakhek Loop by Motorbike was written by Pete Vrouvas of TheOnlyPete.com. Pete is a California-based backpacker, food lover, beer drinker, and adventurer focused on sharing experiences and tips on travel, technology, and food. 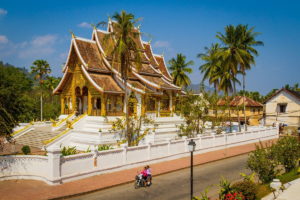 7 Great Things to do in Luang Prabang

7 Great Things to do in Luang Prabang, Laos Luang Prabang is an idyllic town in Laos surrounded by rivers, mountains, jungles, and waterfalls. The 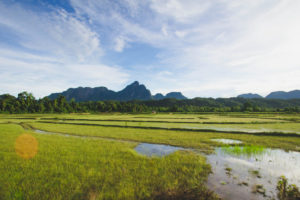 Two Weeks in Laos, an Ideal itinerary I didn’t plan this two week Laos travel itinerary before I went. It happened by mistake. I was